“Our beloved Pat Walsh was influential in my diplomatic formation and laying the foundations for my role today in Timor-Leste’s foreign ministry. He always stressed the fundamental importance of working from first principles. His wonderful book will continue to inspire me (and to honour the political cat with only six lives that I had to leave behind in Jakarta!).” Vicky Fun Ha Tchong, Director General, Multilateral and Regional Affairs, Timor-Leste Ministry of Foreign Affairs and Cooperation. 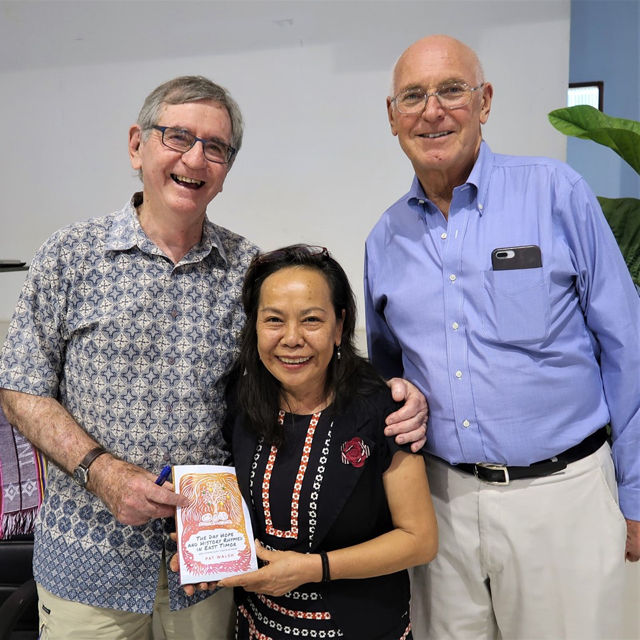 Me with Ian Martin (right) and Vicky Tchong who launched the book in Dili.

The launch of my new book, The Day Hope and History Rhymed in East Timor and Other East Timor Stories, was held in Dili on 28 August 2019, two days before the 20th anniversary of the historic 30 August 1999 ballot referred to in the book’s title.

The site of the launch was significant as were many of the participants. It was held at the former UNAMET precinct, now a teachers’ college, from where the UN administered the ballot. Many documentaries of that time show images of terrified Timorese throwing children over the razor wire into the precinct to escape militias.

The audience at the launch included many Timorese and internationals from 1999, including Ian Martin, the then head of UNAMET.

The book was launched by my long-time friend Vicky Tchong, whom I had known from the late 1970s through my contacts with the East Timorese diaspora community in Melbourne.

Many thanks to Vicky for her warm tribute to me and the book in her lovely launch speech. And many thanks to supporting reactions from other friends, two of which I reproduce immediately below.

“I read The Day Hope and History Rhymed (a great title) from cover to cover on my flights back (to the UK), and enjoyed it hugely.” Ian Martin, Special Representative of the UN Secretary General to Timor-Leste’s 20th anniversary of the 1999 referendum.

“I deeply enjoyed each page of this book. I especially love its quirky angles, characters, nods to history (including bits not known by many) and its Seamus Heaney anchors.” Kieran Dwyer, bookworm, Senior Communications Officer, UNICEF, New York.

See here for some selected extracts.

The book is available for purchase in Timor-Leste, Indonesia and Australia.