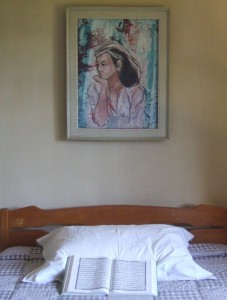 Picking my way up Dago Rd during a recent visit to Bandung, I suddenly found myself in a cul-de-sac.  It was just on 6 pm, a busy time with local Muslims breaking their fast. The footpath had been temporarily sealed off with a bench rigged up to serve dinner to hungry customers and the go-around alternative on the side of the road was blocked by a stationary angkot parked tight against the curb.

Noting my predicament, the stall owner suggested I squeeze through a narrow gap between the bench and his mobile stall, but as this would require me to remove my back pack, duck under head-high steel rods holding his make-shift roof and step down over the curbing onto the busy road, I declined. Sensing I was tired and a bit frustrated, he kindly offered me a seat and then served me a syrupy banana drink in a plastic cup.

It’s a sort of red bull, I observed after a sip, just the thing to get you going after fasting all day, like tennis players use at the change of ends. Delighted with my endorsement, he and his two customers then launched into the prying but polite interrogation that customarily opens encounters in Indonesia.  Where had I come from? Where was I going? How old was I? Why on earth was I walking, up hill to boot? Didn’t I have a car? Was I alone? Was I married, how many kids, what was I doing in Bandung?

Things suddenly became serious, however, when I said vaguely that I was in Bandung publishing on human rights. What did I think of human rights in Indonesia post-Suharto, one of the three immediately asked. Sensing a loaded question, I mumbled something about the situation being far improved on paper and vis-à-vis political freedoms but economic rights were seriously lagging. That was all my interlocutor needed. Shifting closer, he launched into a strong, but persuasive, critique of inequity in Indonesia. Chinese dominated the economy, rich people from Jakarta were buying up big in Bandung, corruption was rampant, and poor people like them were not benefiting from democracy. Australia they volunteered politely was, of course, far different.

Digging in my right hip pocket for small rupiah to pay for the drink (I carry big denominations elsewhere to avoid the embarrassment of displaying a wad of notes in public, not least after an exchange like this), I insisted on paying. The owner wouldn’t hear of it. What about something for his kids. No way, it was enough that I had shared their company at an auspicious time.

May the reward for his sedekah be generous and not-long coming.