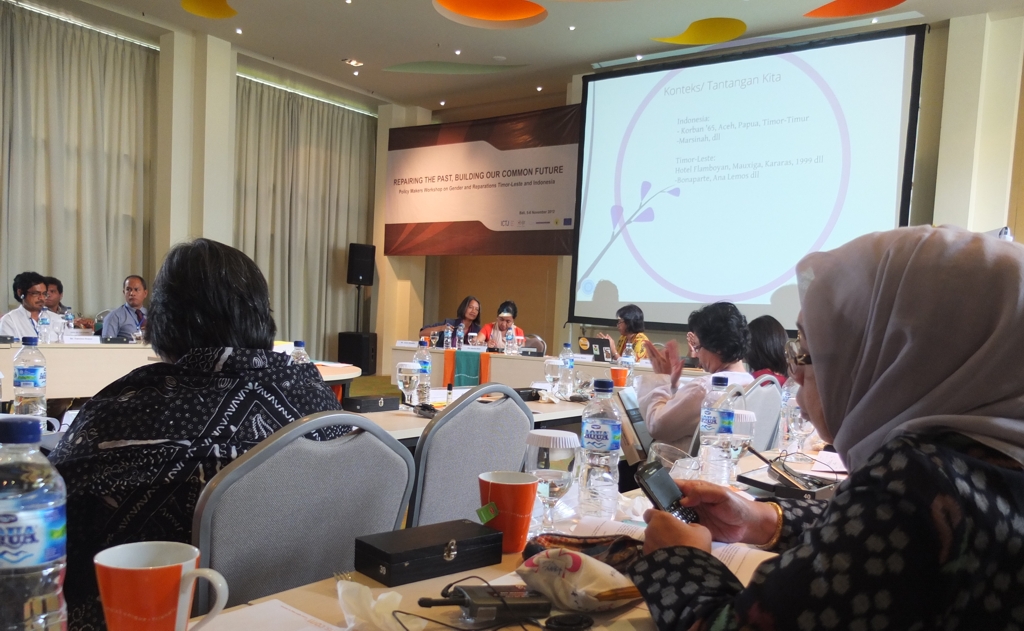 On 5 and 6 November, thanks to the International Center for Transitional Justice, I was privileged to join a workshop in Bali on historic violence against women in Indonesia and East Timor entitled Repairing the past, building our common future.

The workshop was informative, inspirational and moving. I am still processing the compelling documentation on crimes committed by state agencies against women in 1965, then in Aceh, Timor-Leste, and Papua; the legal case for redress by the Indonesian government; and what can be done to ensure the victims are heard and that the state ends the official denial that lies at the heart of continued discrimination against victims and its refusal to provide the reparations women’s organizations are now calling for in keeping with international law.

Advocates for justice are not optimistic. Commenting on women victims in Aceh, one speaker declared that ‘the only thing that has advanced for these victims is their age’.

Over the two days it became clear to me, however, that real progress is being made. This is principally due to three factors:
(a) the collection and exposure of hard evidence of crimes that would have been unthinkable a few short years ago;
(b) advances in relevant international standard setting (e.g. the 2006 UN principles on the Right to Reparations) and law;
(c) the institutional engagement of official but independent bodies represented at the workshop like Indonesia’s National Commission on Violence Against Women (Komnas Perempuan, established in 1998 in response to sexual violence against Chinese women committed during the May riots that year) and East Timor’s Provedor (National Commission) for Human Rights, and some very committed NGOs and women activists.

Working together these three factors are a powerful force for change, not least that it is women who are pushing the envelope. The workshop, however, added two other factors: it included policy-makers in the process by inviting several MPs from both the Indonesian and East Timorese Parliaments to join the workshop, and second, it provided these women MPs with an opportunity to meet and work together on what is a common cause.

These are not easy issues, least of all politically. For the sake of long-suffering victims, however, it is sincerely hoped that the participants will continue to collaborate on these matters that are vital for both past victims and to prevent recurrence. The valuable information provided and the involvement of Indonesian organizations and MPs should also help timid East Timorese policy-makers to move forward in 2013 and adopt pending legislation for a national reparations program and Institute of Memory.

Indonesian organizations have declared 2013 the year of truth (Mari Bicara Kebenaran, Let’s talk truth). This is designed to encourage Indonesians to open their minds to the dark and hidden history of their country through listening to the voices of women survivors and to mobilise public support for the rights of these victims.