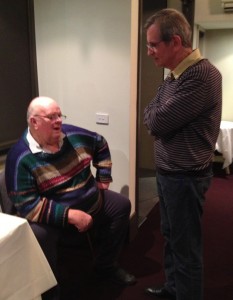 Annie and I braved the Melbourne evening rush hour and wet weather on Thursday, 27 February 2013, to travel across the city to listen to Les Murray read and discuss his poetry. It was well worth the effort. Les, who flew down from his home at Bunyah in NSW that day, was the guest of The Carmelite Centre in Middle Park for their Poetry for the Soul series.

Looking every inch the ‘bushie’ he says he is, Les, now 74, is the antithesis of what many might expect of someone who is an Australian living treasure and said to be one of the best poets writing in English. Portly and dressed in a multi-coloured woollen jumper and track-suit pants, he speaks with an uncultivated voice which, together with his way of talking in images, adds to his warm, rustic charm. One sensed that poetry, and what he called the ‘trance’ and ‘ecstasy’ that inspire it, comes first and that everything else is secondary. He was also refreshingly candid about his poetry, volunteering that he was no good at writing religious poetry and that some of his poems weren’t much good. He shared freely about his life, his semi-autism, being bullied at school, tensions in his father’s family, his conversion to Catholicism (because its ethos of forgiveness attracted him more than the narrow Protestant ethic he’d grown up with), and 20 years of depression. During those dark years he found he could write poetry. You can write yourself out of trouble, he said.

Poetry, he told us, is hard work, harder than prose but more satisfying. It’s like jazz, which looks like improvisation but is difficult because both freedom and control are present. Poetry is like dancing with a book on your head. It has an element of play and of lightness about it. A work of art must always exceed its own rules. Poetry is the fruit of three processes – dreaming, reason, body (the rhyme, words, images etc that incarnate the work). It will last if it embodies this tri-fusion, not least the first element. An under-dreamt poem will be flat; one must go beyond intelligence. Poetry is whole speak, the opposite of the narrow speak that characterises, for example, stock exchange reports. The idea that sparks is essential. Usually making it into a poem requires much work and dexterity but sometimes the poem writes itself, comes down your arm and out through your fingers.

As we left I told Les I was originally from a dairy farm and that his poems on cows, butter factories and stock whips (described as ‘thonged lightning’ in Kiss of the Whip which he read to us) resonated with me. He confessed, however, that – like me – he hadn’t done much milking! In his talk he made some references to the Armenian genocide, to Hitler, and to Mao but when I told him I had learned a lot in East Timor about genocide and forgiveness, he said he did not know much about Timor. I also told him that my sister-in-law Paula Keogh has just completed a memoir on the Australian poet Michael Dransfield. He replied that Michael wrote some good poetry and has been neglected.

You can read some beaut samples of Les Murray’s poetry on his website.