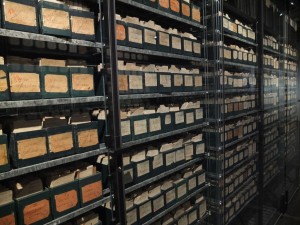 Red Cross index cards used to trace the missing after World War I.

The International Red Cross is revered for its service to suffering humanity as both the world’s conscience and humanitarian front-line. It is also a keeper of the world’s memory and stores a vast archive of records on man’s inhumanity to man in the subterranean vaults of its headquarters in Geneva.

On 21 May 2013 I was privileged to visit these archives and see what material the ICRC holds on Timor-Leste where it worked during the 1975 civil war, the great famine of 1979-80 and subsequently.

CAVR recommended that organizations such as ICRC make their records available to Timor-Leste so that it can accurately and fully reconstruct its historical memory. Some of the ICRC material is public and accessible. The bulk of it – records related to the missing, family reunions, displaced people and political prisoners – will only be declassified 40 years after the event.

Further information
Report of my visit to ICRC, Geneva.