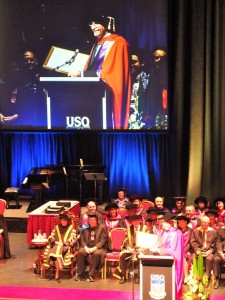 Last Saturday, Chancellor Bobbie Brazil awarded me an honorary Doctor of Letters (honoris causa) at the University of Southern Queensland in beautiful Toowoomba. The award was for my work in human rights but as I pointed out in my acceptance speech I also consider it testimony to the importance the USQ places on social justice and recognition of the extraordinary people who make up the proud human rights sector and the global code of conduct called the Universal Declaration of Human Rights that is their inspiration. Prodded to explain the genesis of this singular distinction, Vice-Chancellor Professor Jan Thomas would only comment that ‘God works in mysterious ways’, even if assisted by a committee of rigorous academics. 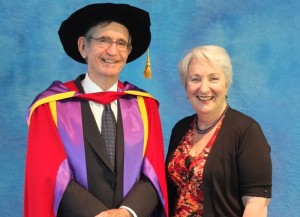 With my wife Annie at the USQ award.

It was a splendid, colourful occasion, steeped in ancient ritual and symbolism, all undertaken to emphasise the solemn status attached to learning. Robed and hatted like a medieval cardinal, I joined hundreds of students graduating in the arts, sciences, engineering, nursing, education and business and an impressive number of PhD’s. USQ specialises in on-line distance education and many of the graduands travelled from different parts of the world for the occasion.

In the morning session, Andy Gourley, Director of the Red Frogs Chaplaincy Network, gave an entertaining account of his work with schoolies events on the Gold Coast that has now gone national and international.

My theme to the afternoon graduands was achieving against the odds based on the extraordinary contribution of civil society to the liberation of East Timor. The talk is called Achieving Against the Odds (click title to read). 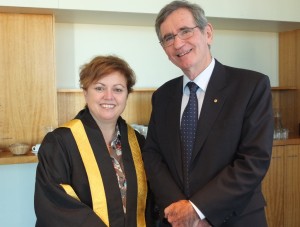 USQ Vice-Chancellor and President, Professor Jan Thomas, personally and warmly hosted our visit on top of her many duties. Supported by her wonderful staff, she treated Annie and I like visiting royals. We are both now enthusiastic ambassadors for USQ and Toowoomba.

We were also delighted to meet, amongst others, Deputy Vice-Chancellor John Dornbusch, Professor Peter Terry, the new Bishop of Toowoomba, Mgr Robert McGuckin, Mark Copeland, head of the Diocesan Social Justice Commission and Professor Gerard Fogarty who was made an Honorary Professor Emeritus the same day for his services to USQ and psychology.